who built this site 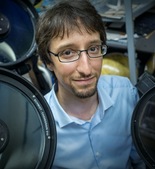 Marc works on modeling gravitational waves from merging neutron stars and black holes. He also teaches physics and astronomy, and is the faculty advisor for Montclair's public telescope nights.  Marc was an undergrad at Caltech and received his PhD from Cornell. He has held postdoctoral positions at the Kavli Institute for Theoretical Physics, the NASA/Caltech Jet Propulsion Lab, and the University of Wisconsin-Milwaukee. Marc led the design and creation of this site as part of his NSF grants. You can read more about his work and interests on his personal website or his ﻿﻿﻿MSU site﻿﻿﻿.

Goran received his bachelor's in physics and master's in mathematics at Montclair State. He wrote a master's thesis on the gravitational-wave memory effect. Goran worked on producing sounds from numerical relativity and post-Newtonian waveforms. He is currently a lecturer at Montclair State University and Bergen Community College.

Nicholas received his BS in physics in 2015. He is now enrolled in the graduate program at Stevens Institute of Technology. Nick wrote a code to model sounds from eccentric extreme-mass-ratio inspiral orbits. He also worked on a separate project related to gravitational lensing by black holes. Nick won an award for most outstanding graduating physics major.

Blake was among our top students and won several awards for excellence in physics. Blake developed sound files from numerical relativity simulations and also for eccentric binaries. He completed a project to compute the orbital phasing for eccentric binaries to high post-Newtonian order. After graduating in 2016, entered graduate study on gravitational waves in the physics department at Montana State University.

Funding sources and other support:

This material is based upon work supported by the National Science Foundation under Grant Numbers PHY-1308527 and PHY-1653374. Any opinions, findings, and conclusions or recommendations expressed in this material are those of the author(s) and do not necessarily reflect the views of the National Science Foundation. In addition to the NSF, we gratefully acknowledge support from Montclair State University's College of Science and Mathematics and the Educational and Public Outreach group of the LIGO Scientific Collaboration. Some of the figures in this site were taken from various locations on the web. We have tried to provide accurate credits when possible. Please contact us if you would like the figure removed or have an attribution added or corrected. Any errors, inaccuracies, or opinions on this site are the responsibility of the authors and do not reflect the views of the NSF, the LIGO Scientific Collaboration, or Montclair State University.