So far we've explored circular orbits. But generally, stars will have orbits that are elliptical---their paths trace out ellipses. This is what we will explore here. (We will assume the compact objects don't spin about their axes so all the effects we discuss will only depend on the ellipticity.)

The ellipse is characterized by two numbers: (i) its "width;" this tells us how big the orbit is. This is usually specified by the semi-major axis of the ellipse (half its width along the "long" end). For orbiting binary stars, the period of one orbit also gives us this information (if we know the total mass). (ii) The other important number for an ellipse is its eccentricity e. This tells us how "elliptical" it is: e=0 is a circle and e=0.99999.... is an extremely elongated ellipse (one axis is much shorter than the other).

Let's investigate some of these effects. First, let's artificially turn off radiation-reaction; i.e., we'll assume that the binary orbits do not shrink in response to their GW emission. Here is what the GW signal looks like in this scenario for different values of the ellipticity e. We also experiment with turning the periastron precession effect on or off. ​

GW signal from non-shrinking neutron star + black hole binary. Two ellipticities are shown: e=0 (circular/top/red) and e=0.5 (middle/blue and bottom/gold). In the blue curve we have turned the periastron precession effect off. It is turned on in the gold curve. The corresponding sounds are below. Because eccentricity significantly modifies the frequency content of the signal and sounds, it was necessary to show signals corresponding to different orbital frequencies (f_orb is the orbital frequency; 2 f_orb would be the strongest frequency component if the orbit were circular).

Similar to the above plot except only showing e=0.9 with periastron precession off (top/green) or on (bottom/magenta). Notice the extreme "spikiness" of the signal when the orbit is highly elliptical. Notice also that an additional modulation is present due to periastron precession.

Same plot as above but zoomed-in to resolve the sharp spiky features.
Examine the plots and their corresponding sounds. (The sounds do not vary, so you only need to listen for 2 or 3 seconds.) The circular orbit (red) is a pure tone. When adding eccentricity (e=0.5, blue curve) you clearly notice that there is now more "structure." (Note that the orbital frequency has been lowered so that the resulting sound---which now includes frequency components several times the orbit frequency---is less annoying to listen to.) Turning on periastron precession (gold curve),  you hear further structure (i.e. frequency components) are being added to the signal. Finally, when the eccentricity gets quite large (e=0.9, green curve) the distinct "knocking" sound becomes very apparent; adding precession to this introduces an interesting modulation to the knocking.

Now let's turn radiation-reaction on, allowing the orbits to shrink and the orbital frequency to increase with time. As in the circular case, the frequencies present in the sounds will increase with time along with the increase in amplitude. The cases we examine below are similar to the non-evolving cases we looked at above, but we have adjusted the starting orbital frequency to produce sounds that evolve at an appropriate rate, clearly display the relevant features, and are not too annoying to the ear. Examine the behavior of the different cases below and listen to the corresponding sounds. 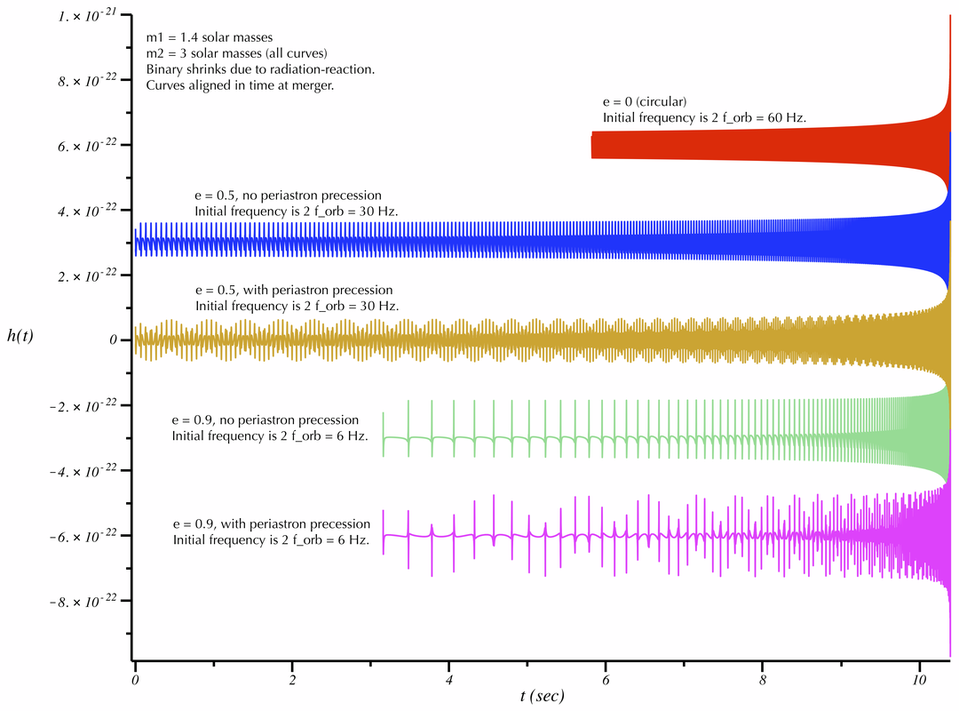 1.4 solar mass neutron star inspiralling into a 3 solar mass black hole. The orbit ellipticity is varied, as well as the presence or absence of periastron precession. The binary shrinks due to gravitational-wave emission, and the ellipticity decreases as the inspiral progresses. (The indicated ellipticity is the value at the starting time.) The signals start at different orbital frequencies and are time-shifted to line up at the merger time. 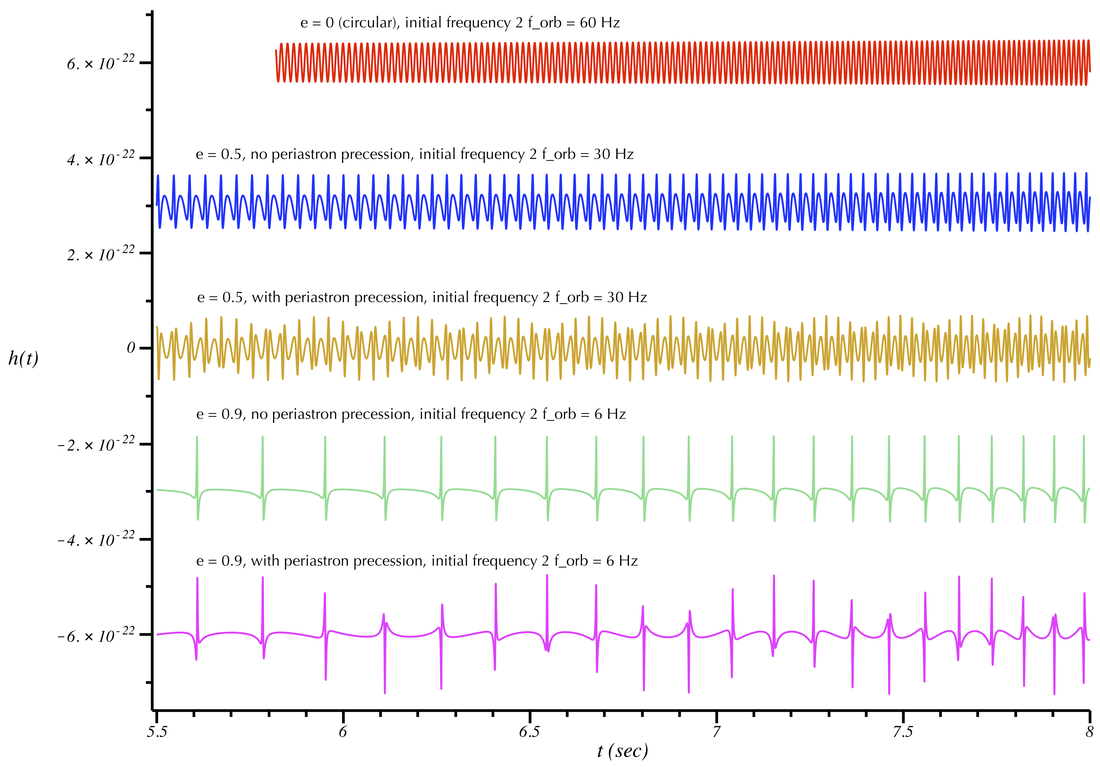 Same as above but zooming in to show the early-time structure of the signal. Notice that the frequency is increasing as time progresses (the time difference between adjacent peaks is getting smaller). 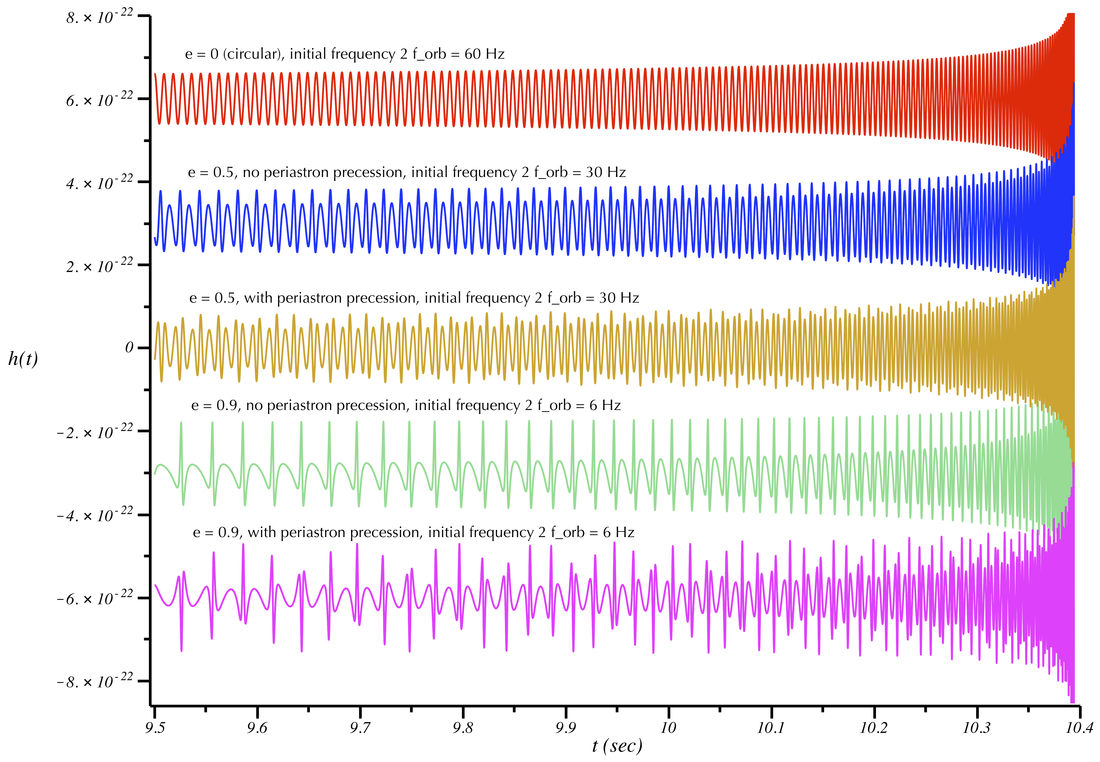 Same as above but zooming in to show the final second before merger.
Listen to the sounds above and compare to the plots of the gravitational-wave signals. Notice that many of the features from the non-evolving case remain. When radiation reaction is present, you can hear the all the frequencies present in the sound sweep up to higher values. As the volume of the sound increases the ellipticity of the binary decreases---this is illustrated by a decrease in the "knocking" component of the signal. Because the ellipticity is decreasing, the elliptical binaries sound closer to the circular case as the approach the end of the inspiral.

What if the black holes rotate about their own axes? How does that affect the gravitational wave signal? Learn more at our spinning binaries page.
Notes on waveform model used to produce sounds on this page:
The sounds on this page used a simplified waveform model. The amplitude and phasing are accurate only to leading post-Newtonian order (0PN). When periastron precession is neglected, Newtonian elliptical orbits are used. Periastron precession is accounted for by adding a 1PN accurate periastron term to the relevant equation of motion. The compact objects are nonspinning and assumed to lie 100 Mpc from Earth. Sky localization angles in the detector antenna pattern functions are taken to be Theta=Phi=0. The polarization angle is Psi=pi/8. The binary inclination angle is pi/8. Only the inspiral is considered and the calculation is stopped at an upper frequency corresponding to the last stable orbit (ISCO). For details see Eqs. 2.12, 2.14-2.23, 2.29, and 2.36 of Favata, Phys. Rev. D 84, 124013 (2011).