"We did it...again."
--Fulvio Ricci, Virgo spokesperson
The second detection of gravitational waves

On June 15, 2016, the LIGO Scientific Collaboration and Virgo collaboration announced the second confirmed detection of gravitational waves from the merger of two black holes. This is an exciting confirmation of LIGO's ability to detect these mergers. Here are some of the key facts from this discovery.

Key Facts about GW151226Sounds from all three events and further discussion are provided below.

More information:
This lovely animation from the SXS numerical relativity group shows the inspiral and merger of GW151226, along with corresponding gravitational-wave signal as a function of time. The lower panel shows how the frequency and relative orbital speed increase with time. See also the SXS youtube channel for more great videos.

Unlike the case of GW150914, one cannot easily see GW151226 by taking the LIGO data and applying a filter. (See discussion at our GW150914 page.) For that reason we start by showing the reconstructed waveform as presented in the discovery paper, followed by the corresponding sound:

Figure 5 from the discovery paper in Physical Review Letters. The top panel shows the (unfiltered) gravitational-wave signal in the Livingston detector. This is produced via a numerical relativity simulation. The gray bands show a range of waveforms that agree with the data at the 90% confidence level. The bottom panel shows the evolution of the gravitational-wave frequency and relative orbital speed as a function of time (as the inspiral/merger proceeds).
The following is the audio of the above signal, but starting at a slightly lower frequency (30Hz) than the detector was sensitive to. Headphones or speakers with a subwoofer are recommended to fully appreciate the sound. The sound is played in stereo at the actual frequency and duration of the real signal. The Livingston signal plays in the right ear and the Hanford signal in the left. The time offset between the two signals corresponds to the actual 1.1ms time delay. The sound will repeat once (you will hear two chirps, which are the same signal replayed once).
The sound above might be difficult to hear in detail. Caltech and LIGO lab have created a frequency-shifted version, which plays along with a time-frequency plot showing the "chirp" signal from GW151226. The video below plays sounds from both GW150914 and GW151226, first at their natural frequencies and then shifted to higher frequency. The colors show the amount of signal power at the corresponding frequency and time. The upward curving colored "path" that evolves in the plot is characteristic of the "chirping" nature of inspiraling compact binaries.

"Sounds" from all events in Advanced LIGO's first observing run

As discussed above, Advanced LIGO's first observation period ran from mid-September 2015 to mid-January 2016, netting ~49 days of clean simultaneous data from both detectors. Over that period three events of interest were found: two confirmed detections at >5 sigma confidence (GW150914 and GW151226) and one event candidate LVT151012 (found at lower significance, 1.7 sigma). Below we show a plot of the signal template in the Hanford detector for each of these three events. To give a sense of the intrinsic duration of each signal, we plot the template from 30Hz to the merger. (The actual signals were detected at frequencies starting a bit higher than 30Hz, where the detector noise is lower.) The sounds of the three signals are below the graphs. Listen to them in the order presented (GW150914, LVT151012, GW151226). Notice how the lower mass signals are longer in duration and evolve to higher frequencies. ​

Best-fit theoretical template in the Hanford detector signal for the three loudest events in Advanced LIGO's first observing run. The time axis indicates the signal duration from 30 Hz; the vertical axis shows the strain amplitude (strength of the gravitational-wave signal). (This plot was produced via data from a spinning but non-precessing effective-one-body/SEOB waveform model. It is similar to data shown in Figure 1 of the O1 BBH paper linked to above. Unlike similar plots for GW150914 shown elsewhere, the Hanford signal was not inverted above, but it was inverted when creating the audio files below.)

Graphical representation of the last audio file, showing each event played twice separated by a short gap. Only the Hanford signal is shown. The sound includes the Hanford and Livingston signals in stereo.
You can find more "sounds" from GW151226 and the other sources at the LOSC data release website. See also their excellent tutorials.
​

A comparison of black hole sizes

It is interesting to compare properties of LIGO's three gravitational-wave events. We first start with a comparison of the black hole sizes. In the image below we plot the size of each black hole against a map of the US east coast. Each "row" contains three black holes: the left two are the pre-merger black holes and right-most larger black hole is the merger remnant. The "width" of each black hole is computed from the circumference of a Kerr (spinning) black hole (and dividing by pi). The "shape" of each hole is an oval because the event horizon bulges outward at low latitudes. (This figure uses the median values for the black hole masses and spins reported in Table IV of O1 BBH paper.) 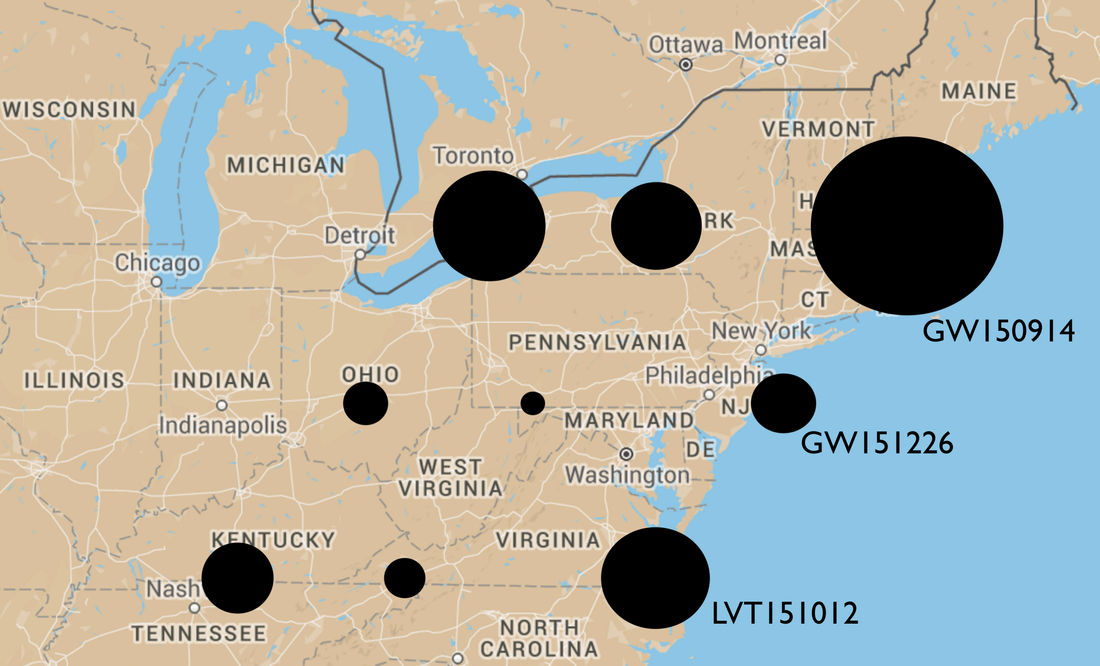 Relative sizes of black holes observed in Advanced LIGO's first observation run. The left pairs are the pre-merger holes. The width of each black hole is proportional to the spin-dependent circumference/pi of a Kerr black hole.
See also this very nice diagram showing all known black holes observed with both gravitational-waves and electromagnetic waves.
​ 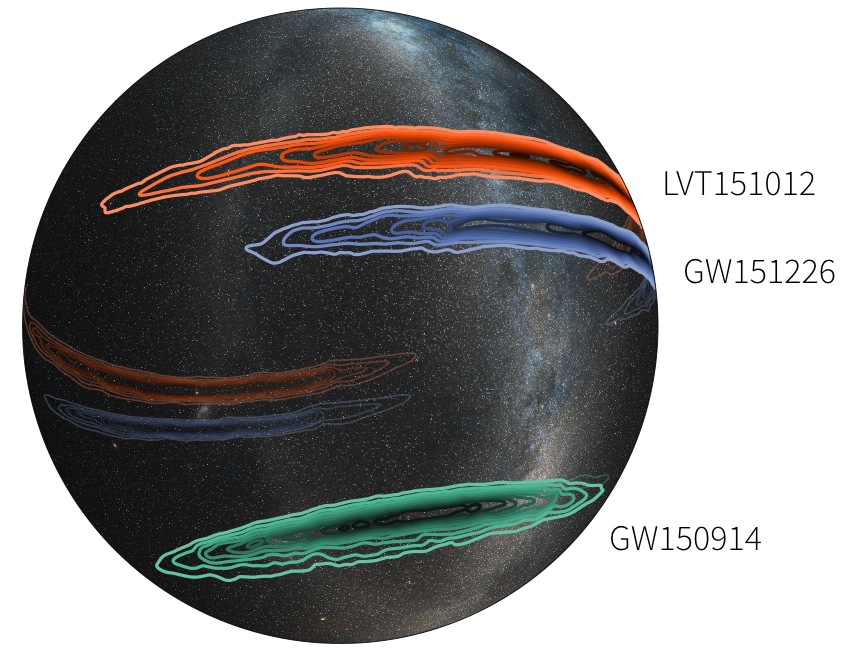 Sky map showing a three-dimensional projection of the Milky Way onto a transparent globe, along with the probable locations of the three LIGO events. The outer contour represents the 90 percent confidence region; the innermost contour signifies the 10 percent confidence region. Credit: LIGO (Leo Singer) /Milky Way image (Axel Mellinger)
You can further explore the angular location of GW151226 via this interactive skymap from the LOSC's Skymap Viewer or via the Gravoscope site.